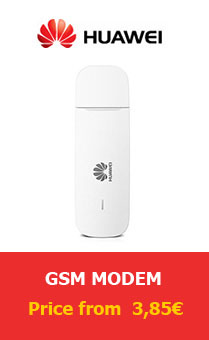 Today the company PAOLI trade s.r.o. and Huawei Technologies signed a distribution agreement about M2M products from the regions of Central, Eastern and Northern Europe. Both companies are in the above mentioned regions join forces to build a dynamically growing market of 3G and 4G modules. To achieve growth of trade in these regions will mainly assist products MU709s 3G and LTE ME909s whose what are build up on chipset HiSilicon company owned by Huawei.

About HUAWEI M2M
Huawei Technologies is one of the world's leading providers of information technology and telecommunications solutions. More than one-third of the world's population directly or indirectly from Huawei Technologies. Huawei company headquarters is in Shenzhen (China), the company employs 150,000 people worldwide. With its three business divisions Carrier Network, Enterprise Business and Consumer Business, Huawei Technologies covers 170 countries. Huawei employs 70,000 people in the development and operates 16 development centers worldwide, as well as 28 innovation centers together with partners. For M2M area offers Huawei 3G and 4G modules for the automotive, industrial and consumer electronics based HiSilicon chipset.